If you’ve been smoking a while, you’re probably looking for ways to intensify your marijuana high. After all, the more you smoke, the more your tolerance level increases.

When you’re smoking marijuana for the first time, it’s intense. But, over time, that high decreases into just a buzz that quickly wears off.

Fortunately, there are some easy ways to intensify your marijuana high (aside from picking potent pot to start with). 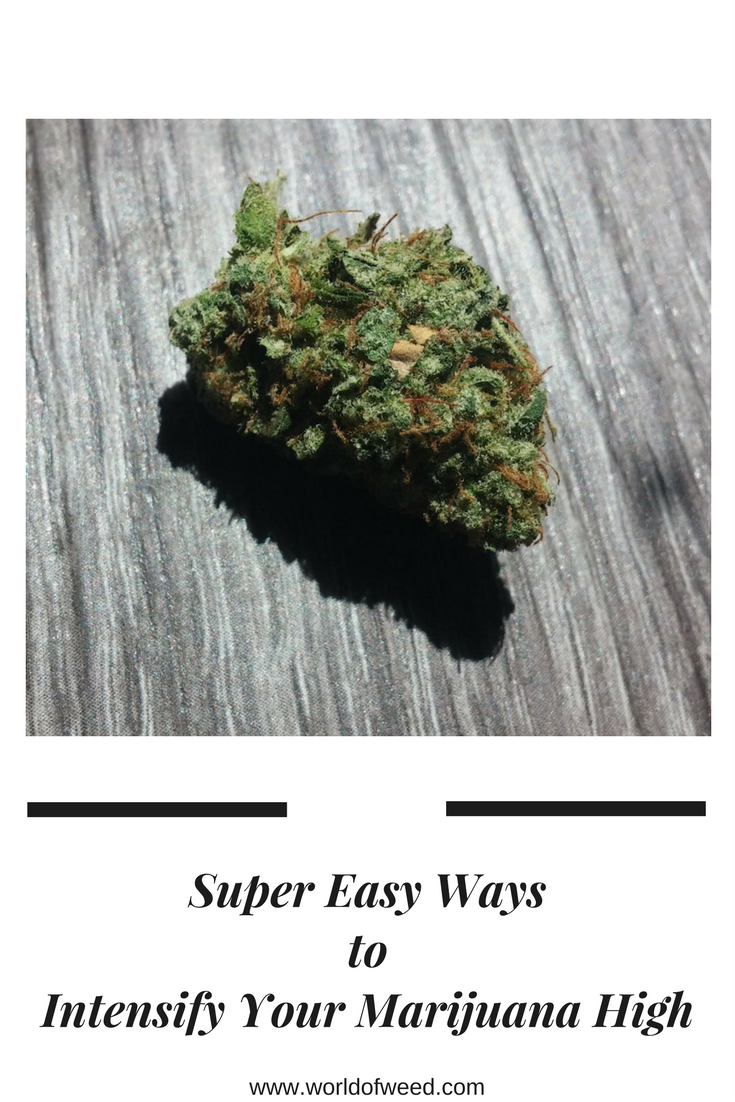 Not only are mangoes a tasty fruit rich in vitamin A, but they’re also one of the best ways to stretch out and intensify your marijuana high.

Mangoes get their ambrosial smell from Myrcene, an oil that belongs to the terpene class of compounds. It’s the terpenes that give marijuana the aromas, flavors, and effects it has. Some strains produce more Myrcene than others, and mangoes help bring them out in the weaker strains.

Myrcene is what allows THC (what gets you high) to work its way through the blood brain barrier at an accelerated rate, as opposed to the rate it would travel without that oil. This is also what gives indica strains the “couch lock” feeling.

Most indica buds contain around 2% Myrcene, which is responsible for that “stony” effect, rather than the uplifted and bubbly effect from sativa.

Just eat some mangoes (a big smoothie) 45 minutes prior to the consumption of marijuana, and you’ll notice your high comes on faster and stronger.

Add ice cubes to a bong

If smoking out of a bong, you’ve undoubtedly burned your throat least once, or made your lungs a bit sore from the heat. It happens.

Fortunately, one of the easiest ways to intensify your marijuana high also helps you avoid those harsh hits.

Put a few ice cubes in your bong, along with the water, and then smoke your marijuana as you normally would. The ice will cool down the smoke, allowing you to take smoother, fuller, and longer hits.

If you eat some foods that have a lot of Omega-3 fatty acids 30 minutes before smoking marijuana, you’ll intensify your marijuana high

In order to maximize your body’s ability to efficiently synthesize marijuana and get the full effects of the plant, eat a balanced amount of Omega-3 and Omega-6 fatty acids. Foods like eggs, fish, walnuts, avocado, quinoa, and hemp are excellent sources of these.

Similar to those fatty acids, healthy fats boost your high by delivering the THC directly into your bloodstream. Because of this interaction between THC and healthy fats, adding cannabutter to recipes – or simply spreading it on a piece of toast – is a great way to enhance both THC and CBD highs.

The pairing of marijuana with chocolate is hardly a new concept (pot brownies, anyone?), but there is an actual scientific reason as to why dark chocolate boosts a marijuana high.

Dark chocolate contains high levels of cacao, which slows down the time it takes for anandamide (your brain’s bliss chemical) to break down. This makes the euphoric effects from the marijuana last longer than normal.

The trick is to eat the darkest chocolate available – look for one that is 72% or higher. Bonus? Super dark chocolate has antioxidants.

After the medicinal benefits of marijuana were discovered, many recreational and competitive athletes turned to Mary Jane for pain relief, nausea relief, and mood enhancement. Those who worry about the health of their lungs use vaporizers or edibles, rather than smoking.

Additionally, a recent study by the University of Sydney determined THC levels went up by 15% after marijuana users (14 observed) did 35 minutes on a stationary bike. The reason? Cardio boosts the plasma THC levels in regular marijuana users.

(Always check with your physician before engaging in any type of exercise regime.)

Don’t want to exercise? We get it.

Drink some tea instead. Black and green teas are full of catechin, an antioxidant that binds with your brain’s CB1 receptors, bringing on those feelings of bliss and relaxation. When those teas are sipped in pairing with marijuana, the mood elevation and stress relief effects are significantly increased.

Do some deep breathing

When inhaled properly, marijuana has the ability to open your lungs and air passages and can bolster you bronchi. By increasing the number of breaths you take before and after each of your hits, you will have a deeper and more open cough that essentially cleans out your lungs.

Exhale and then inhale fully a few times before toking up, pulling in more oxygen with each breath. Breathe in slowly, filling your lungs with the smoke. Inhale a bit more after you pull your hit, and then hold it for a few seconds before exhaling as steadily as possible.

This will filter the smoke through your lungs better, enhancing the marijuana high.

If you’re an experienced smoker looking for a way to really increase your marijuana high, it’s time to double up.

Add the concentrate of your choice to the top of your bowl, and your high will hit harder and faster.

Try every cannabis connoisseur’s dream true: Moon Rocks (Root Rocks) from Hang Roots. Flower that was dipped in rosin and then rolled in kief, this is one thing that will most definitely send you soaring.

What are your top ways to intensify your marijuana high? Let us know in the comments below!

Why You Get the Shakes After Smoking Weed, and How to Prevent the Weed Shakes

Is It Safe to Smoke Weed Around Pets?
Tweets by WorldofWeedRec
© World of Weed